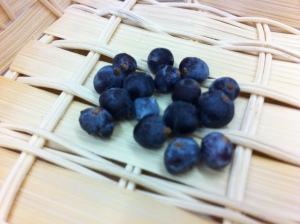 A number of recipes I’ve been eying in the past few weeks call for juniper berries and though they are common in many European dishes, they aren’t common to North American cooking. Nor are they common on our grocery store shelves.

What is common here though are the juniper bushes on which they grow and as I was walking back to work at lunch today, I found myself staring at a berry-laden juniper right next to the city bus transitway! At first glace, they appeared to be the young green ones that are not useable but closer inspection revealed some mature blue berries ready for harvest. Since I had an armload of stuff, was limited for time and was getting a few odd looks from passers-by, I limited my harvest to a small handful. I’ll go back when it’s not so busy and do a more thorough job. Then I’ll dry them on a windowsill for a few weeks and put them in a jar for future use.

I’ll have a few more urban harvest possibilities in coming weeks – rose hips (for jam), crab apples (spiced and preserved in jars, or jelly) and then there’s the street where black walnuts rain onto the road in the fall. There’s the puffball mushroom growing in the yard … if it survives the foot traffic. The tomatoes discovered recently at the back of the yard, sprouted from one of last year’s wayward tomatoes. And who knows what else?!

I love that there are little nuggets of goodness out there, just waiting for those who take the time to seek them out or just plain see that they’re there. There’s something immensely satisfying in harvesting these gifts of nature.