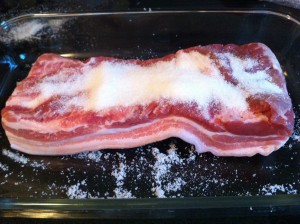 Early in July, I had the pleasure of tucking into a charcuterie plate at Juniper restaurant. I remember only a few things – house ham, duck something – but everything on the plate was wonderfully tasty! Charcuterie dominated my brain in the following days and it wasn’t long till some research on the subject had me searching for the book Charcuterie, by Michael Ruhlman. A trip to Chapters on Rideau Street put the book in my hands last week and then the hunt began …

I decided to make the first thing addressed in the book – bacon! The required sugar and kosher salt posed no problem but coming up with curing salt and pork belly took some work.

I knew from past experience that pork belly can be had from the local butcher store but has to be ordered and comes at high cost. A Toronto website listed T & T Asian Supermarket as a pork belly source and when I checked our Ottawa T & T store there it was – in approximately one-kilo chunks, at a very reasonable price!

Another site suggested Nicastro’s Italian deli as a source for curing salt and I was able to find it at their Merivale Road location, in a one-kilo bag labeled ReadyCure. 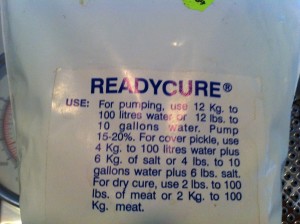 Now, American recipes (like the ones in the book) call for a product called pink salt or InstaCure, which are 6.25% nitrite. The ReadyCure package didn’t list the percentage of nitrite, nor did the store staff know it, however, the package listed the Toronto manufacturer’s phone number and a quick call revealed it to be 1% nitrite.

After some wish-I-could-say-they-were-quick calculations, I was able to determine that, if I added 600 grams of kosher salt and 675 grams of sugar to my kilo of ReadyCure, I’d have three times the amount of Ruhlman’s basic dry cure (plus a bit more), at the correct percentage of nitrite. So this I did.

I’d picked up two pieces of pork belly and opted for slightly different treatments for each. The first one was dredged in approximately 75 grams of the basic dry cure and sealed in a large Ziplock bag. I did the same to the second one, but added about a quarter-cup of maple syrup. (I’ve a hunch I’ll prefer that one!)

So now it’s a 7-day waiting game, give-or-take a day perhaps, apart from a quick flip of each bag every other day. The meat will leach liquid and firm up over time. Once cured enough, it’ll be time to drain the liquid, rinse the meat, then roast or smoke it, low ‘n slow, to an internal temp of 150 degrees F. I’ve a week to sort out which it will be – while I’d far prefer to smoke it, I’m not sure I have the capability to do it as low ‘n slow as it needs to be done.

Watch for the follow-up to see which method wins and find out how each version tastes once sliced and fried. I sense it’s to be, for me, a rather long week of impatient anticipation. Hope it’s worth it!