I’ve played around with bread-making here and there over the last few years and done a fair amount of research on different flours. In the course of some web browsing I stumbled onto the topic of Red Fife wheat:

Bought to Canada by David Fife, of Peterborough, in 1842, it became the main spring wheat variety grown in Canada and the northern U.S. for decades. It was gradually displaced, however, as “new and improved” wheat varieties came onto the market and has only recently been re-introduced. In the past few years, Red Fife flour has been discovered and embraced by the artisan bread world for the fantastic flavour and deep golden-red crust it produces.

Intrigued, I tried to source some locally about a year ago and came up empty-handed. Then, while researching something entirely different last week, I discovered a Red Fife wheat grower only a stone’s-throw past the 100-mile ‘local’ definition, discovered also that the grower stone-mills it into flour, found out that Westboro’s newly-relocated Natural Food Pantry, just blocks away, had it … and here it is! 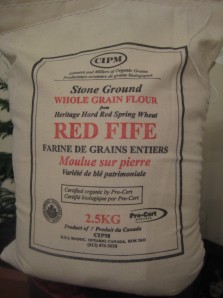 I think what pleased me most in finding this flour was discovering that it’s grown and milled just outside the small town of Madoc, Ontario, where my grandmother lived all her life and where I spent almost every summer of my childhood.

A bit more hunting netted a promising recipe for Red Fife whole wheat bread that uses two different pre-ferments (a la Peter Reinhart) for the dough and a flower pot as a sort of ‘brick oven’ to bake the bread.

Now I just need to buy a terra cotta flower pot* and find time in the next few weeks to give it a go!

*OK, I know, there’s the wood-fired brick oven I built in the back garden but winter has arrived here and although I cooked outside in it that first winter, I’m just not that stoic at this point. The best I can say is maybe …